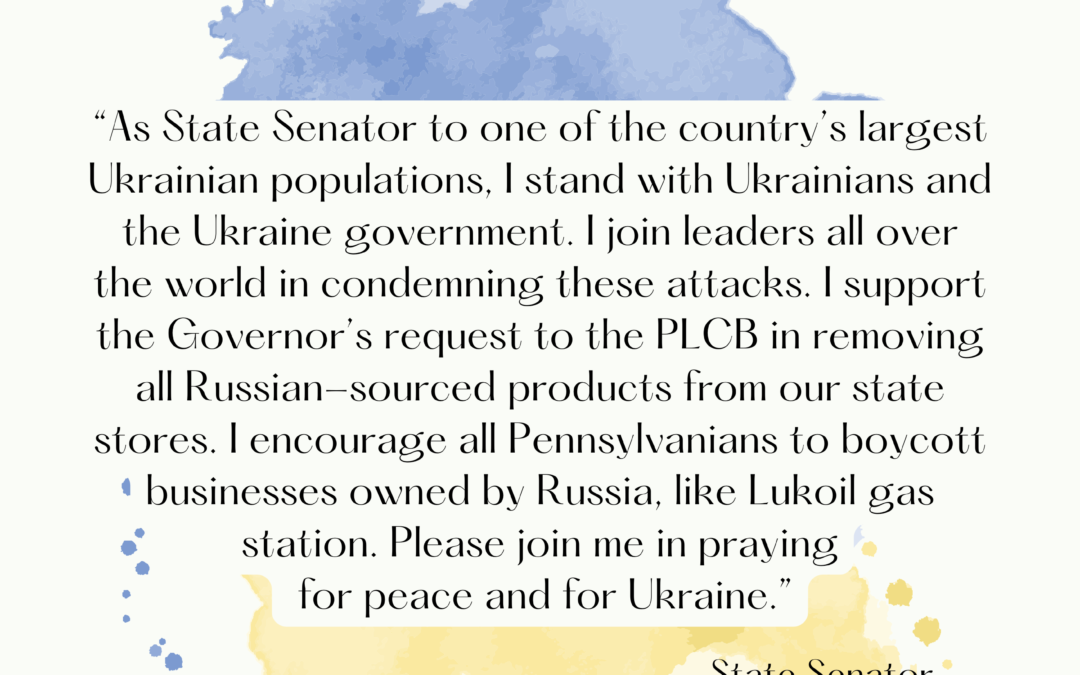 Bethlehem – Feb 28, 2022 – Senator Lisa Boscola (D-Northampton & Lehigh) will be introducing a resolution into the Pennsylvania Senate urging the Commonwealth, its municipalities and Pennsylvania businesses to divest themselves from Russian holdings in light Russia’s unprovoked attack on Ukraine.

“I am calling on all of Pennsylvania to stand in solidarity with Ukraine in fighting the unprovoked attack by the Russian Federation,” Boscola stated.  “The actions taken by Russia are in defiance of international rights and global peacekeeping efforts and must be met with swift and decisive action by our Commonwealth.”

Boscola’s resolution calls on all levels of government in Pennsylvania and urges businesses in the Commonwealth to cease commercial trade with and divest any holdings with Russia.  The unprovoked attack and invasion must be met with international economic repercussions and this resolution justifies that endeavor by urging all Pennsylvanians to stand in solidarity.

“I stand with Governor Wolf’s call to the Pennsylvania Liquor Control Board (PLCB) to remove Russian-sourced products from state liquor stores and commend the PLCB for its quick and affirmative response to that call.”
“I ask you to stand with me in support of this resolution and with the citizens of Ukraine,” Boscola requested of her Senate colleagues in her co-sponsorship memorandum to them.