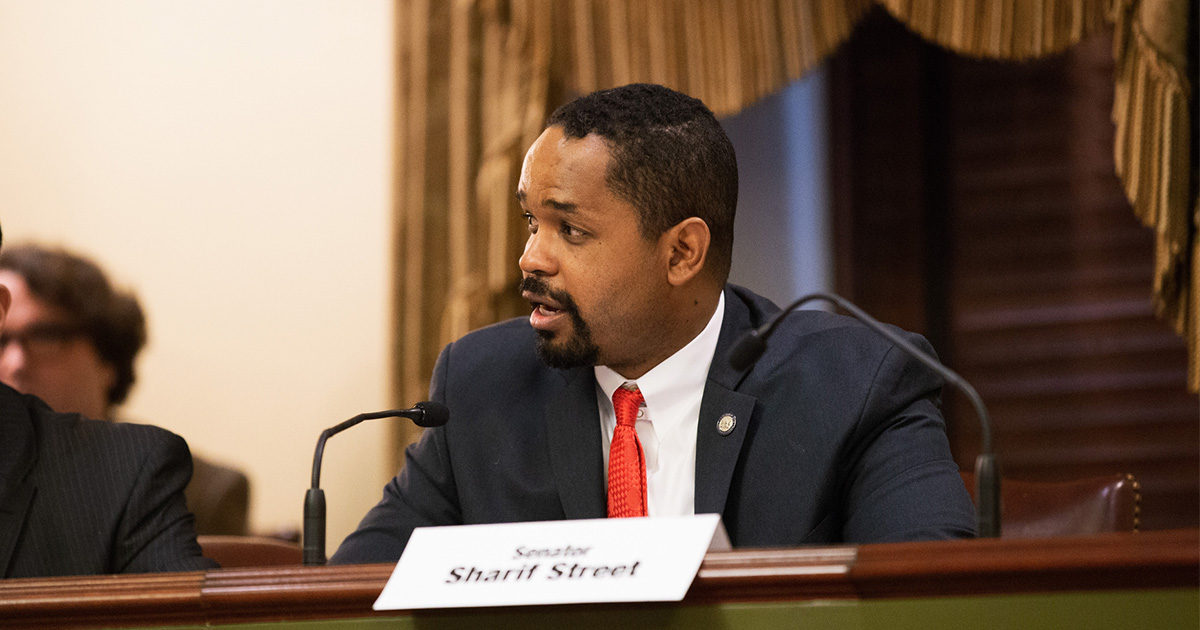 Held at SCI-Dallas at the request of Sen. Sharif Street, Rep. Jordan Harris and Rep. Donna Bullock (all D-Phila.), the hearing focused on Sen. Street’s bill (Senate Bill 942) that would provide the possibility of parole for model prisoners serving life sentences.

“I was encouraged by more than a dozen legislators who joined me for a historic joint policy hearing at SCI-Dallas on Senate Bill 942, ending life without parole in PA,” Street said. “Direct testimony underscored the need for parole reform from both a fiscal and moral standpoint. We must empower the Parole Board to address the life sentences of Battered Women defending themselves and the numerous ‘lifers’ who have not taken a life.”

The Street legislation would enable someone sentenced to life imprisonment to be considered for parole after spending at least 15 years in prison. The state Board of Probation and Parole could still reject parole requests from those who do not deserve it or pose a safety risk to the public. Rep. Jason Dawkins (D-Phila.) has introduced companion legislation (House Bill 135) in the House of Representatives.

Harris, who co-sponsored the recently-enacted “clean slate” law, added, “Yesterday’s policy hearing and tour of SCI Dallas was a historic moment. Both House and Senate Democratic Policy committees along with the Pa Legislative Black Caucus join to hear from a group of constituents often forgotten about. In this time of fiscal crisis, it’s the legislature’s responsibility to ensure that we are good stewards of taxpayer dollars. There is much cost saving that can come from the Department of Corrections while keeping communities safe. Lengthy yet unwarranted sentences have increased DOC’s budget without providing any true benefits to our communities. Mass incarceration must end and must end now.”

Sen. Lisa Boscola (D-Northampton/Lehigh), who co-chaired the hearing said, “With crime victims always at the forefront, it is imperative that legislators make more of an effort to examine proposals that would further reduce incarceration while preserving the ideals of justice and rehabilitation that guide our justice system.”

One of the inmates serving a life sentence told the joint committee: “Men serving 15 consecutive years in prison have a recidivism rate of under 10 percent compared to a rate of 73 percent for those who served less than 10 years.  Men incarcerated at an extremely young age who spend decades in prison face the truth that you can rehabilitate yourself or you can end your life with nothing to show for it other than pain, grief and misery.

“Recently, over 200 juvenile-life sentenced inmates were released from prison after being afforded the opportunity for judicial review or parole.  Their recidivism rate is less than 0.01 percent.  These former inmates have become men who are rehabilitated, who are active in the lives of their families, but also in their communities — giving them strength and leadership.”

Elizabeth Geyer from the Coalition to Abolish Death by Incarceration added, “We often forget that there are those who are serving life-sentences without the possibility of parole that have never committed murder.  Individuals that were accessories to a crime that ended up with a victim dying as a result – an accessory to the crime when murder wasn’t the motive or purpose of the events but happened consequently.  Individuals convicted of the crime they themselves did not do and had no adequate representation at trial.  Additionally, prior to the enactment of the Battered Spouse Law – which provides for an affirmative defense in a criminal case in which an long-time abuse victim ends up taking the life of their abuser – many women currently serve life in prison without the possibility of parole because they took the life of their spouse or abuser and the change in the law did not grant them the ability to have their cases retried or resentenced.”