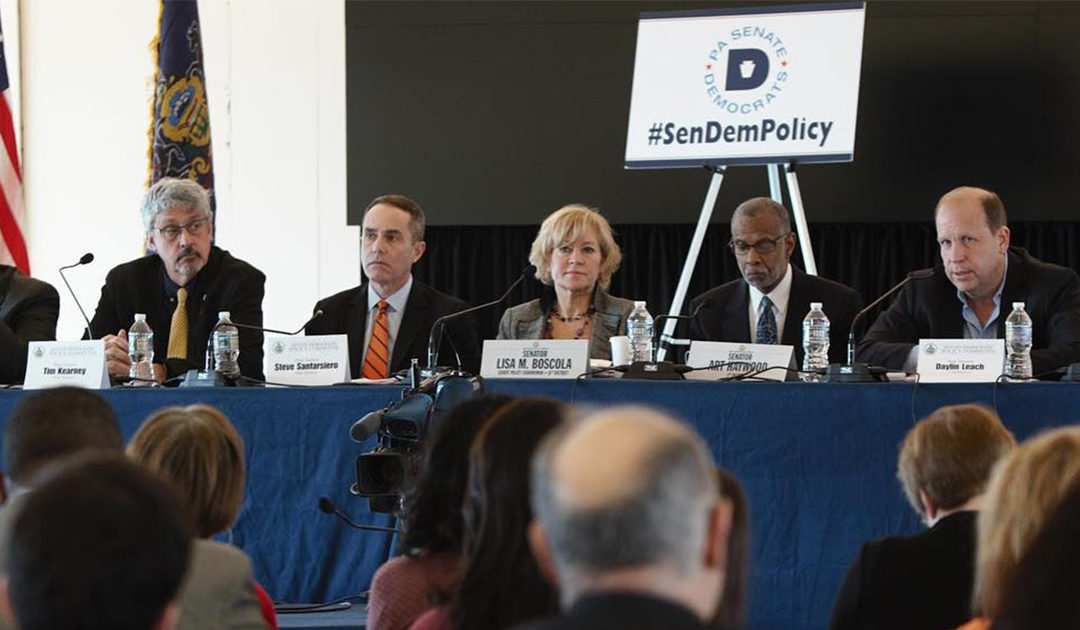 “This policy hearing is to share proven solutions to reduce gun violence,” Haywood said. “I thank the advocates and Senator Boscola (D-Lehigh/Northampton) for making this happen. The time to act in Pennsylvania is now.”

Boscola, who chairs the committee added, “Everyone understands that gun violence is a problem that is worsening in our state. Hopefully, we can gather innovative ideas that will help us craft effective legislative solutions that would help prevent gun deaths without infringing on people’s constitutional rights.”

“Americans are 25 times more likely to be murdered with a gun than people in other developed countries,” said Marybeth Christiansen of the Pennsylvania Chapter of Moms Demand Action for Gun Sense in America. She also stated that guns are now the second leading cause of death for children in the United States, and the number one leading cause of death among black children and teenagers in this country.

Calling it a way to get guns out of the hands of dangerous people, Haywood fought for last year’s law (Act 79 of 2018) that disarms those who violate protection from abuse orders. He also authored legislation (Act 148 of 2018) that enables public housing agencies to relocate domestic and sexual violence survivors who would otherwise be trapped in dangerous situations.

Victoria Green, executive director for the E.M.I.R. Healing Center spoke in support of legislation Haywood introduced last session that would have required a firearm purchasing license be obtained in Pennsylvania before one could buy a gun.

“In Massachusetts, everyone must obtain a gun license prior to purchasing a gun,” said Janet Goldenberg of the Massachusetts Coalition to Prevent Gun Violence. Goldenberg added that because of the strict gun laws in Massachusetts, that state has one of the lowest rates of gun death in the nation.

Goldenberg said that because gun violence includes homicide, suicide, and accidental death, “safe storage laws” are an essential part in keeping guns out of the hands of those who should not have them.

Officials from the National Rifle Association and other firearms rights groups were invited to take part in the hearing but declined to participate. Haywood called their refusal to participate and share their perspective a “sad statement on the polarization that has stifled attempts to reform and improve the state’s firearm laws.”